Finding a Playground in Montreal

Usually when I've visited a new city, I've headed straight for the shops or the sights. Now, with a 4-year-old, it's straight to the map to find the nearest park and playground.

Look at any street map of Montreal and you'll see that it is littered with green. But not all of the green areas have playgrounds; some are squares with park benches but no grass and some are beautiful green pastures with great big old trees shading the edges. Here I've compiled a list of parks that we've visited that have playgrounds around Montreal. 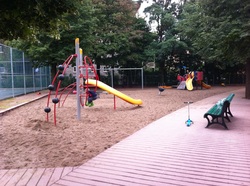 I discovered this park a few weeks ago but Michael and Austin had already been there weeks before on a Daddy day. Funnily enough they'd bought some bagels from the famous St-Viateur bagel shop before ending up at the park with the same name.

This park is going to be one fun place to be in winter! It has a pond that flows from a waterfall and continues in a circle around a central island where the toilet and entertaining block is. The pond, like many other ponds in Montreal parks, is only about 25cm deep and it's an easy guess that in winter when everything is frozen in the -20C weather, it will be a skating pond. It's interesting to notice how I never looked closely at the ponds in parks, and never really wondered why there were so many parks with ponds, until I realised that it's for the winter entertainment. It's just inconceivable to an Australian; ponds don't turn into magic ice skating rinks in winter, you still have to go to a skating rink like Canterbury ice skating rink and pay who knows what these days for a couple of hours skating in a round rink to the sound of 80s love songs and disco lighting! This winter's mission: to ice skate on as many outdoor ponds as we can (sans disco music!)! 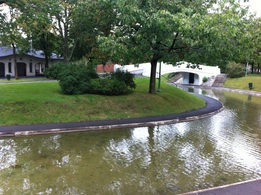 Anyway, this park has a good fenced in playground with climbing equipment for all ages, although the swings are only for littlies unfortunately. There are plenty of park benches for parents and guardians and the whole park is sand so it's like one giant sand pit for the kids. I don't know if sand is any better than bark when the shoes come off at the front door but at the park it's infinitely better than bark or wood chips!

The rest of the park offers meandering pathways around and over the pond and is nice and shady. You often see people sitting under trees eating a picnic or reading a book. A very peaceful park off the very trendy main street of Outremont, Av Bernard. 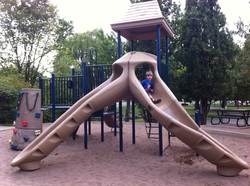 The first time we went to this park, it was in the summer holidays so school wasn't in. When we got to the fenced in playground there was a woman at the gate with a clipboard and people were lined up with their ID out. I thought it must have been closed for a summer school or playgroup or something so we just wandered around the paths following the pond and waterfall and ended up running up and down the great big mound/hill behind the playground (well, Austin did the running, I just watched!).

The other day we visited this park again and I realised I probably could have gone in because it's a public park and they couldn't stop me. Or, because the kids all had vests on similar to netball vests so they probably were in some kind of school thing and the parents had to present ID to pick them up. This time there weren't any groups like that at the playground and we had practically free run of it while we were there.

This park is attached to a school so it has an publicly accessible basketball court and soccer/hockey field. There are also areas of shade and plenty of park benches and tables. The playground itself is divided into two; one area for small kids and an area for bigger kids. I would say both are suitable for the in between ages of 4-5 (Austin's on the younger one in the picture here).

All in all, a great park again. One we will surely go to again and again while we're here. Can't wait to see the trees in full autumn action! 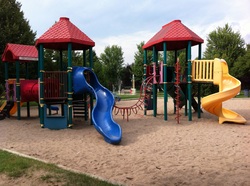 We saw this park a couple of times on the bus going to and from our local shopping centre, Rockland Centre. One weekend we decided to walk home to let Austin have a run as he was full of beans and we noticed it had a water park. Since our local water John F Kennedy Park in Outremont (below) closed in mid-August, we've been keeping our eyes out for another one. Well, I have to say, this park beats JFK Park hands down!

The park is massive; it has the water park, playground, a sand volleyball court, a baseball pitch with bleachers and tennis courts. And each section is surrounded by lush green trees and shrubs so it feels comfy and safe. There are lots of benches to sit on and even some tables as well. People can operate the water park by holding the black knob on the fire hydrant for a couple of seconds. Spray comes out of the hydrant,jets zoom up into the air all around, a park bench has a shower coming out the back rest, and two elephants go head to head in a spraying competition! Warning: take your swimmers, you're bound to get as drenched as your kids and you'll love it! 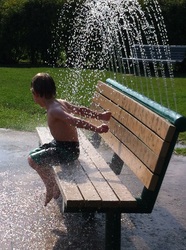 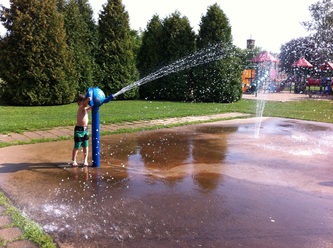 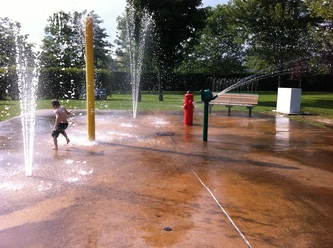 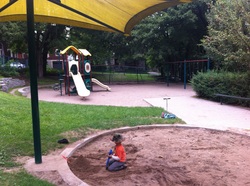 Location: Lajoie Ave between Rockland and Hartland in Outremont. Bus: 119

I found out about this park when I went to visit a daycare centre for Austin. The manager said that they take the kids to the local park every day for a play so they can get outdoors (weird concept for me coming from the suburbs of Sydney where daycare centres have backyards!). This was the park they take them to so this week we decided to check it out.

The park itself is pretty big, lots of trees (the usual for Montreal it seems) and winding paths through it. It's set on a hill so fun for running around in. The playground is fenced in and has swings for babies and older kids, a gym set and a shaded sandpit. There are also a couple of tables to sit at and the whole thing has concrete benching around it for monitoring parents/carers. All in all, a nice park to go to and I can see why they take the daycare kids there! 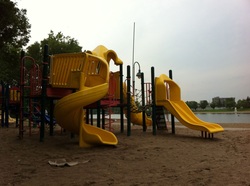 Location: Ile Notre Dame, east of Montreal's downtown. Metro: Jean Drapeau NB: When you get off the metro, head for the bus station and take the free 767 bus to 'la plage', which is where the playground is. It's $8 for adults and $4 for children over 2, but well worth it.

This is a great family day out in summer. I'm guessing in winter they have different sports and activities available but I'll just have to wait a few months for those!

The main attraction for families is the man-made lake, the
'beach', which has filtered water (they're very proud of this) and lots of water activities for people of all ages. There are plenty of life guards, in fact, there were about 10 of them on the day we went and there were about 15 people at the park! But I'm sure it gets busy on sunny days and weekends.

Bring your swimmers and bucket and spade with you when you come as the water is great. Austin made sand castles and splashed around in the water for 4 hours with a lunch break in the middle! You can hire paddle boats or let the kids play on the little slides set up at the edge of the water. There are lots of park benches and picnic tables to sit at and there's a little shop with some ice creams, sandwiches and filter coffee but not much else, so bring something to eat with you. 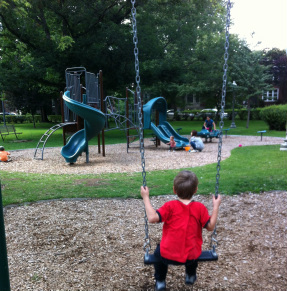 We accidentally found the modest Queen Elizabeth Gardens when we first moved to Montreal and were staying in Downtown. We caught the Metro to Atwater and found that the 'park' outside the station wasn't a park but a square, Cabot Square, in fact. It was a nice square with a lovely stone sculpture display but it didn't have a playground. A short walk later we stumbled upon the Queen Elizabeth Gardens.

Queen Elizabeth Gardens is quiet despite being situated on the very busy Sherbrooke Street W. It is a hedge-lined park with gorgeous big maple trees scattered throughout. They are so big that most of the park is in speckly shade and the playground is also mostly shady - very important to an Australian mother! 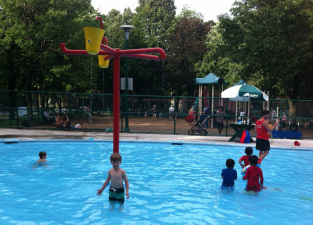 This is a natural favourite because it's just around the corner from where we live in Montreal. But it is also a fantastic park! Not only does it have a playground but it also has a splash pool and a 50m pool next to it. You have to pay to enter the swimming pool but the paddle pool is free and usually open until 6pm in the summer. Another great thing about this park is again the shade. The majestic maples filter in light and sunshine but provide ample shade at the same time. 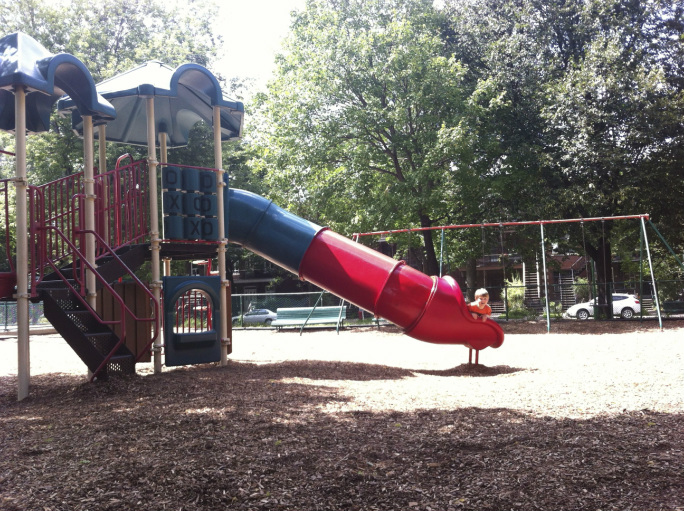 The Mont Royal park is somewhere everyone has to visit while in Montreal. Jogging and cycling locals mix with ambling tourists along the meandering paths up and around this magnificent mountain. Definitely a place to see in all seasons.

After walking up the mountain to the lookout over Montreal, we headed towards the Lac aux Castors and had a well-earned ice cream (crème glacée). When we were ready to head home, we started walking towards where we were planning to catch the bus and happened upon a cool 21st century park, complete with bouncers and swings for toddlers and rock and rope climbing for the older kids. There was also a sand pit with a digger in it, a flying fox (zip line) and spinning discs. There's even a water play area for hot days. Surrounding the park are lots of picnic tables and park benches to rest and refuel on. And of course plenty of shady trees.